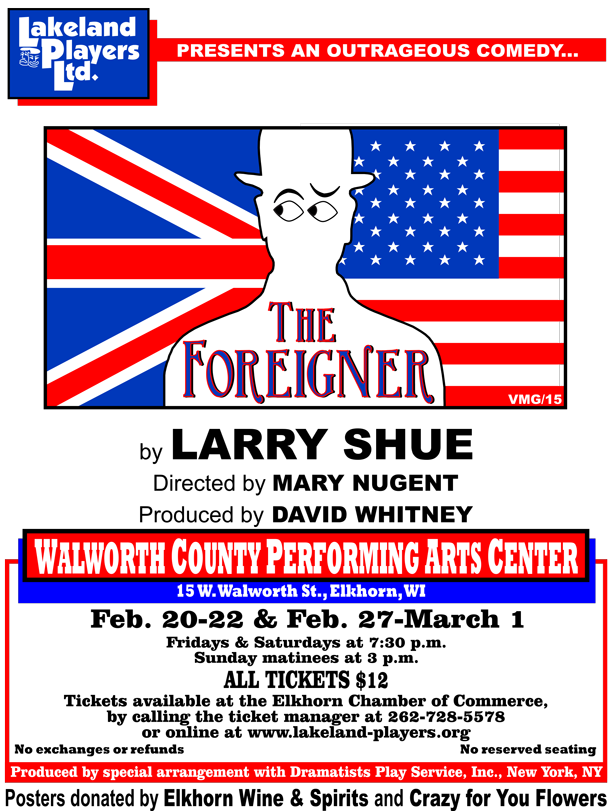 What does a shy Englishman in search of rest do when he visits a fishing lodge in Georgia?


What does a shy Englishman in search of rest do when he visits a fishing lodge in Georgia? In Larry Shue’s hilarious farce, Charlie Baker, a proofreader by day and boring husband by night, adopts the persona of a foreigner who doesn’t understand English. When others begin to speak freely around him, he not only becomes privy to secrets both dangerous and frivolous, he also discovers an adventurous extrovert within himself.

Winner of two Obie Awards and two Outer Critics Circle Awards as Best New American Play and Best Off-Broadway Production. An inspired comic romp, equal in inventive hilarity to the author’s classic comedy The Nerd, the present play enjoyed a sold-out premiere in Milwaukee before moving on to a long run Off-Broadway. Based on what the NY Post describes as a “devilishly clever idea,” the play demonstrates what can happen when a group of devious characters must deal with a stranger who (they think) knows no English. “Something funny is going on in Milwaukee—to the delight of audiences at the Milwaukee Repertory Theatre.” —Variety. “I laughed start to finish at one comic surprise after another.” —The New Yorker. “…a constant invitation to relax and laugh at the foolishness of life…” —Village Voice. “Shue’s comedy is positively antic, yet pleasantly seasoned with a few dashes of sentimentality…He has raided comedy’s storehouse…” —Bergen Record.

No Replies to "The Foreigner"

Calendar powered by The Events Calendar